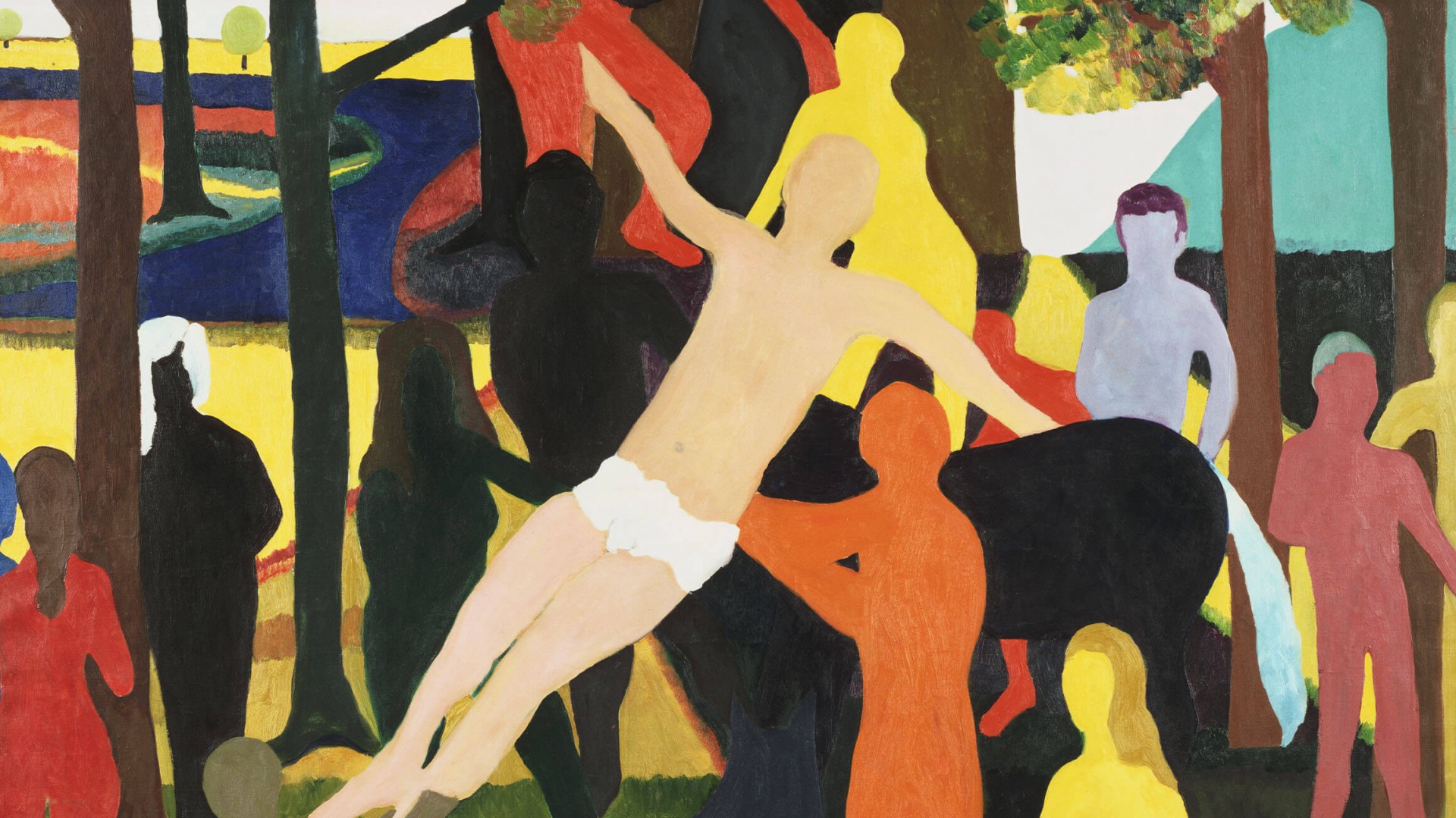 The Philadelphia Museum of Art will present three exhibitions in the coming weeks that explore salient themes of grief, protest, artistic meditation, and remembrance. Drawn largely from the collection, these installations embrace a wide range of media, include numerous important recent acquisitions, and present works created by artists working in the 20th century or earlier whose expression remains fresh, vital, surprising, or even searing today. Elegy: Lament in the 20th Century will examine how artists have used their work to respond to tragedy, grapple with mortality, and honor those who have passed. Waiting for Tear Gas will explore the work of artists, operating in places ranging from Philadelphia to Tokyo, that convey public protest, or response to protest, in ways that bring aesthetic and political commitments together in an act of open, collective, political dissent. Pictures in Pictures will present works that embed other images within their compositions. This installation will consider the ways such embedded images can summon or invoke a presence, making the imagined real, the absent present, or the lost remembered.

The exhibitions will be presented in the new Daniel W. Dietrich II Galleries where they will occupy adjacent and connected rooms.

The ways in which artists have created visual elegies from different perspectives is the subject of this exhibition, which focuses on how makers in a wide variety of media, who lived and/or worked in the United States, elaborate themes about personal and societal loss, grapple with the aftermath of historic tragedies, and commemorate those who have died.

Works of art in the section Commemoration and Memory evoke individuals, some who died under tragic, violent circumstances, including Martin Luther King, Jr., 1983, by John Woodrow Wilson (1922–2015) and His Reward, Emmett Till, c. 1955–60, by Clarence Lawson (1909–1988). Sections dedicated to Symbols of Lamentation and Rituals of Grieving offer themes from poems and religions viewed through modernist perspectives. Christ is lowered from the cross in the richly hued and monumental The Deposition, 1961, a painting by Bob Thompson (1937–1966). Mourners participate in a candlelight ceremony for Day of the Dead (Día de Muertos) in a photograph by George Holton (1921–1979), or they express their grief over an open casket, as seen in the lithograph Funeral, 1952, by Carlos Faz (1931–1953). Rituals of grieving can inscribe themselves on the body, as explored in the section Wearing Grief, which looks at the tradition of mourning attire and how the body can be clothed to convey and to obscure emotion, from a late 19th-century mourning fan, veil, and parasol to Mourning Dress: Upon the Death of Maurice English, 1984, by Risë Nagin (b. 1950), commissioned by Helen W. Drutt English after the death of her husband in 1983. A concluding section explores how artists distill and convey deep emotion through abstraction, as in the imposing painting by Robert Motherwell (1915–1991) called Elegy to the Spanish Republic, 1958–61, and the monumental Malcolm X #3, 1969, by Barbara Chase-Riboud (b. 1939).

A space in one of the galleries is set aside for reflection, with seating and other resources, as Elegy may elicit a range of reactions and questions for visitors. For some, the works may prompt a consideration of the different roles of the visual arts in the grieving process, from emotional catharsis to behavioral catalyst to inspiration to seek justice. For others, the exhibition may offer a sense of comfort and commiseration.

“An elegy is a song or poem expressing sorrow, often focusing on one who has died, and this exhibition creates a space for dwelling on works of art centered on these powerful conditions and emotions,” said Jessica Todd Smith, Susan Gray Detweiler Curator of American Art, and Manager, Center for American Art, who organized the exhibition. “Most of the works on view were created between 1900 and 2000. This chronological distance allows us to consider how artists during the last century worked to keep people, events, and states of being alive in memory and to view events of today through the lens of these artworks from the past.”

Elegy: Lament in the 20th Century has been made possible by the Laura and William C. Buck Endowment for Exhibitions, the Lois G. and Julian A. Brodsky Installation and Exhibition Fund, Ellen and Ronald Caplan, Marsha W. Rothman, Boo and Morris Stroud, and other generous donors. Additional support provided by the Center for American Art at the Philadelphia Museum of Art.

See a list of related programs at the end of this press release.

The act of public dissent has long appealed to artists who seek to represent intense moments of expression. Protests highlight coordinated masses as well as exemplary individuals. They appear, by turns, both organized and chaotic. And they are events filled with visual representations—from painted signs to human gestures—offering up many visual possibilities for artists.

This installation centers on Allan Sekula’s bracing work Waiting for Tear Gas [white globe to black], a 13-minute slide show that presents a complex negotiation of politics, portraiture, and, most importantly, protest within a broader context of artistic representations of dissent and social justice. The recent acquisition is a monument of politically engaged art and was created in the wake of the anti-globalization protests that rocked Seattle, Washington, in late 1999. It consists of eighty-one 35mm color slides that document the artist’s participatory observation of the protest, sequenced and projected at nearly life-size scale on a continuous loop. Viewers of the slide show confront a procession of people who Sekula met in the crowd that day. He has called the work “a simple descriptive physiognomy” that illustrates how “the alliance on the streets was indeed stranger, more varied and inspired than could be conveyed by cute alliterative play with ‘teamsters’ and ‘turtles,’” a reference to the highly visible coordination between organized labor and environmentalists at the event.

Included in the exhibition are works spanning the period from 1913 until 2017. These representations of protest provide an opportunity to reflect across time. Among the highlights are Storm Troops Advancing under Gas, 1924, an etching by Otto Dix (German, 1891–1969) that depicts a horrifying scene created in response to the early chemical warfare introduced during World War I; Demonstrators Cross Broad Street at Girard Avenue, 1968, a photograph (lent by The African American Museum in Philadelphia) by Jack T. Franklin (1922–2009), who captured some of the most defining moments of civil rights protest in this city; Marie Bond, Reading, Pennsylvania, 2006, from a series of portraits by Judith Joy Ross (b. 1946) of people protesting the Iraq War; and a suite of images by David Lebe (b. 1948) that document the Second March on Washington for Lesbian and Gay Rights in 1987, at the height of the AIDS/HIV epidemic in the United States.

The exhibition was organized by Samuel Ewing, the museum’s former Horace W. Goldsmith Curatorial Fellow in Photography. “The year 2020 saw an upsurge of public protest,” notes Ewing, “and even the pandemic did not stop tens of millions of people from coming into the streets in support of Black Lives Matter. We can be sure that many artists joined in collective calls for justice. The works in this exhibition help us reflect on past calls for social transformation and imagine a future they might bring into being.”

Waiting for Tear Gas has been made possible by the Lois G. and Julian A. Brodsky Installation and Exhibition Fund.

For centuries, artists around the world have created images that include other images in their compositions. This exhibition explores the deceptively straightforward question of what makes these images within images so captivating, offering a rich array of examples from across the museum’s collection in response. The works range in date from Allegory of Sight, painted on copper in 1660 by Jan Brueghel the Younger (Flemish, 1601–1678) and depicting an idealized gallery of artworks, to a photograph by LaToya Ruby Frazier (b. 1982) that more than three centuries later offers another kind of gallery—her grandmother’s refrigerator, covered in family photos (2007). With approximately 60 works, the exhibition features prints, drawings, photographs, and paintings, as well as stained glass, a hanging scroll, and a folding screen. It mixes works by emerging and established artists, and places canonical works alongside lesser-studied pictures by unidentified artists. It takes an open-ended view of what a “picture in picture” can be. It includes the expected—embedded paintings, photographs, and drawings. But it also makes space for the surprising or immaterial—internal visions, illusions, reflections, and shadows, imagery that may cast doubt on our very ability to discern the real from the fictive.

Self-portraits of artists mid-sketch or the mirror reflection of a photographer behind a camera remind visitors that every image they encounter is a constructed illusion. In Artist Painting from around 1879 by Jean François Raffaëlli (French, 1850–1924), the viewer is invited to look over the artist’s shoulder as he is absorbed in the work of putting finishing touches on his painting of a ragpicker, a subject with whom Raffaëlli likely identified. This self-portrait of a painter painting, then, is a dizzying example of the act of artistic self-reflection.

Pictures within pictures also sometimes assemble incongruous objects, people, and ideas that otherwise could not occupy the same space—even enabling visions and ghosts to manifest in the physical world and ancestral figures and artifacts to comingle with the living. The exhibition includes a color woodcut print by Tsukioka Yoshitoshi (Japanese, 1839–1892) from around 1882 that depicts the painter Maruyama Ōkyo at work. Ōkyo’s paintings of ghosts were so lifelike that one—shown in Yoshitoshi’s print—reportedly came to life, blurring the lines between tangible pictures and paranormal visions.

The exhibition was organized by Amanda N. Bock, the Lynne and Harold Honickman Assistant Curator of Photographs; Laurel Garber, Park Family Assistant Curator of Prints and Drawings; and Jun P. Nakamura, Suzanne Andrée Curatorial Fellow. As Bock noted, “this show invites us to encounter the museum’s collection in an unexpected way, bringing together works in various media and from many places and time periods. It’s been a rewarding process to bring disparate parts of the collection into conversation, and we’re excited for visitors to make their own connections among the works on view.”

Pictures in Pictures has been made possible by the Lois G. and Julian A. Brodsky Installation and Exhibition Fund.

Grief, Anger & Action: A Path Toward Healing
Wednesday, February 16, 6:00–7:00 p.m.
This talk draws on the range of emotions humans experience in the process of grieving with Buddhist minister Lama Rod Owens and Reverend Naomi Washington-Leapheart discussing how rage can be a path toward healing. Offered in conjunction with the exhibition Elegy: Lament in the 20th Century.