The Philadelphia Museum of Art and the Fondazione Sandretto Re Rebaudengo announced today that Martine Syms has been awarded The Future Fields Commission in Time-Based Media, a collaborative initiative established in 2016 to support the creation, production, and acquisition of a new work by artists active in the expanding fields of video, film, performance, and sound. This is the second in an ongoing series of commissions that offers opportunities to artists from around the world who are exploring new terrain in contemporary art. It provides for the acquisition and presentation of a new work at both the Museum and the Fondazione.

Martine Syms (American, born 1988) is a Los Angeles-based artist who has developed an interdisciplinary approach that bridges the different domains of film, performance, installation, and publishing. Investigative in practice, her works employ multiple technologies to explore representations of the black female body and reveal the ways in which identity, history, and power are constructed, performed, packaged, and consumed. This new commission will provide support during a pivotal moment in Syms’s career, allowing her to extend her multi-faceted approach towards new and increasingly experimental techniques while deepening her investigations into the representations of blackness across generations, geographies, mediums, and traditions.

For the commission, Syms has proposed to create an interactive video installation using Artificial Intelligence (AI) technology that will build upon the artist’s interest in the proliferation, circulation, and consumption of images, as well as her continued research into machine systems and technologies that deprive, and at times erase, black bodies, voices, and narratives of visibility and agency.

Syms is developing the work in close consultation with Irene Calderoni, Curator at the Fondazione, and Amanda Sroka, the Museum’s Assistant Curator of Contemporary Art. The new work will premiere at the Fondazione Sandretto Re Rebaudengo in Turin in Spring 2020, followed by a presentation at the Philadelphia Museum of Art in Fall 2020.

Timothy Rub, The George D. Widener Director and CEO, Philadelphia Museum of Art, stated: “Martine Syms has certainly emerged as a powerful voice in contemporary art, and she has achieved significant momentum. We believe that this is an important moment in which to offer our support. This commission reflects our deepening commitment to new media and will be a significant addition to the collection.”

Carlos Basualdo, The Keith L. And Katherine Sachs Senior Curator of Contemporary Art, said, “The Commission offers the Museum and the Fondazione a tool to connect deeply with what is more vital in art today. I feel that Martine represents precisely that, a willingness to venture into new technologies with a complex understanding of the politics of representation that are so much at the center of our contemporary struggles.”

Patrizia Sandretto Re Rebaudengo, President of the Fondazione Sandretto Re Rebaudengo, said: “We feel strongly that this artist has reached an important turning point in her work and we are eager to follow the project’s development as she pursues this major opportunity. We look forward to sharing it with audiences both in Europe and the United States.”

The Future Fields Commission is granted every two years to an artist determined by a nomination process in which an invited group of leading curators, writers, and critics from around the world are asked to submit artists’ names for consideration by the curatorial teams at the Museum and the Fondazione. The selection of Martine Syms resulted from submissions provided by an international group of curators and scholars that included: Victoria Brooks (curator of time-based visual art at EMPAC / Curtis R. Priem Experimental Media and Performing Arts Center at Rensselaer Polytechnic Institute, and chair of the Contemporary Curatorial Workshop at the Williams Graduate Program in the History of Art), Zasha Colah (curator based in Turin and Mumbai and co-founder of Clark House Initiative), Inti Guerrero (the Estrellita B. Brodsky Adjunct Curator of Latin American Art at Tate in London and Artistic Director of Bellas Artes Projects in Manila/Bataan), Polly Staple (Director of Chisenhale Gallery, London), and Kaelen Wilson-Goldie (writer and critic based in Beirut and New York).

Commenting on her selection for the Commission, the artist said: “I’m thrilled to have been granted The Future Fields Commission and am looking forward to developing this project with the Philadelphia Museum of Art and the Fondazione Sandretto Re Rebaudengo. I’m excited to explore the ways in which AI can be introduced into and push these boundaries, particularly at a time when the limits of AI itself are still very much under investigation.”

The first recipient of The Future Fields Commission in Time-Based Media was Rachel Rose, whose inaugural project has culminated in Rachel Rose: Wil-o-Wisp, currently on view at the Philadelphia Museum of Art through September 16, 2018. In this mesmerizing new video installation, a woman’s fate becomes inextricably tied to a culture of upheaval, suspicion, and persecution in seventeenth-century agrarian England. On November 2, 2018 the work will have its European premiere in Turin, where it will remain on view through February 3, 2019.

Martine Syms obtained an MFA degree from Bard College in 2017 and a BFA from The School of the Art Institute of Chicago in 2007. Her work has been exhibited widely, including focused exhibitions at the Museum of Modern Art, New York; Camden Arts Centre, London; White Flag Projects, St. Louis; and the Institute of Contemporary Art, London; and group exhibitions at the Hammer Museum, Los Angeles; the New Museum, New York; the Studio Museum in Harlem, New York; the Institute of Contemporary Art, Philadelphia; and the Museum of Contemporary Art, Chicago. Syms is also the former co-director of Chicago’s Golden Age, a project space focused on printed matter, as well as the founder of the independent publishing company, Dominica. The artist lives in Los Angeles and is a faculty member in the School of Art at the California Institute of the Arts.

About the Philadelphia Museum of Art

The Philadelphia Museum of Art is Philadelphia’s art museum. A place that welcomes everyone. A world-renowned collection. A landmark building. We bring the arts to life, inspiring visitors—through scholarly study and creative play—to discover the spirit of imagination that lies in everyone. We connect people with the arts in rich and varied ways, making the experience of the Museum surprising, lively, and always memorable. We are committed to inviting visitors to see the world—and themselves—anew through the beauty and expressive power of the arts.

About the Fondazione Sandretto Re Rebaudengo

The Fondazione Sandretto Re Rebaudengo is a foundation for contemporary art, set up in Turin in 1995 by contemporary art collector Patrizia Sandretto Re Rebaudengo. Active since 1992 at a personal level in the promotion of young artists, Patrizia Sandretto Re Rebaudengo saw in the creation of an arts foundation the opportunity to transform her passion into an organized activity able to collaborate more effectively with Italian and international institutions. Since then, the Fondazione has gone on to produce an annual exhibition program that supports contemporary artists. It has also gone on to commission or co-produce highly influential works of contemporary art, for presentation at the Fondazione’s main space in Turin, or for biennales and festivals abroad. Recent commissions include works and exhibitions by Adrian Villar Rojas, Ian Cheng, Ed Atkins and Steve McQueen. The Fondazione’s main aim is to encourage a greater understanding of contemporary art and of today’s leading trends internationally. The vast field of visual arts – painting, sculpture, photography, video, installation and performance – is analyzed and presented to the public not only through the exhibition program but also through an array of in-depth educational activities and events, such as conferences, talks led by artists, curators and critics from acclaimed Italian and international institutions. 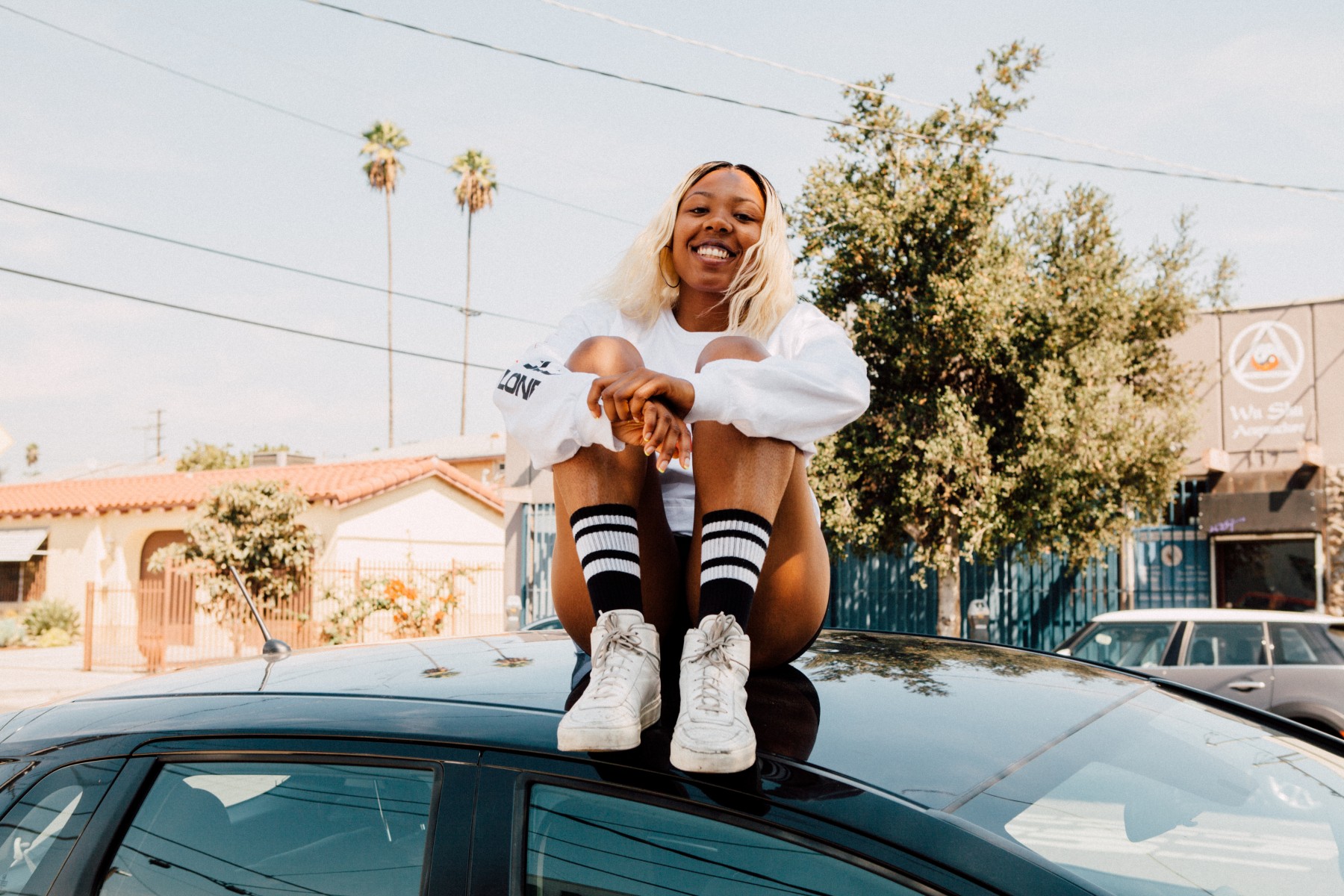 Portrait of Martine Syms. Image Courtesy of the artist and Philadelphia Museum of Art, 2018. Photo by Taylor Rainbolt.
Important: By downloading this image, you are agreeing to the following permissions: Images are provided exclusively to the press, and only for purposes of publicity for the duration of an exhibition at the PMA. The Museum grants permission to use images only to the extent of its ownership rights relating to those images--the responsibility for any additional permissions remains solely with the party reproducing the images. In addition, the images must be accompanied by the credit line and any copyright information as it appears above, and the party reproducing the images must not distort or mutilate the images.
Newsroom