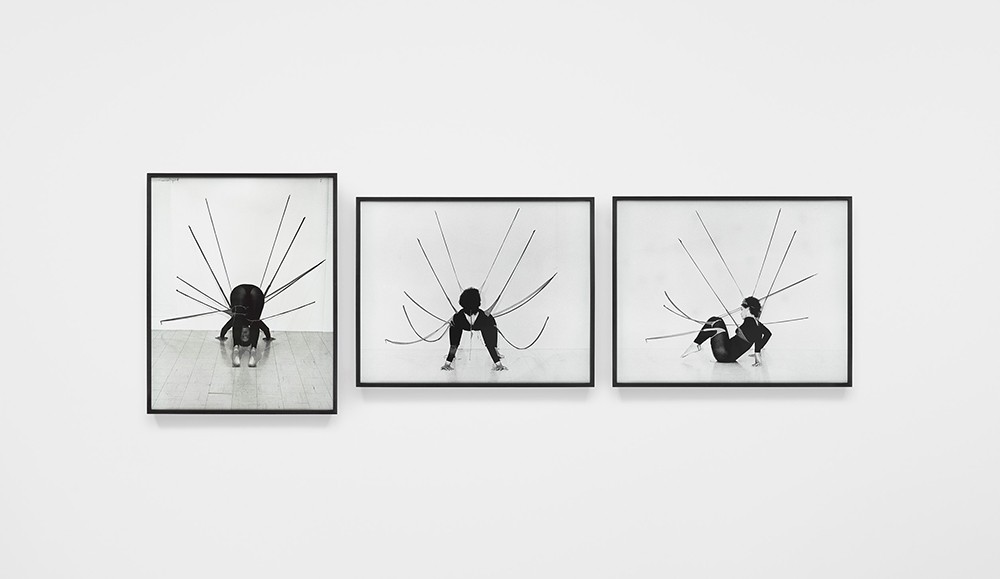 Major Exhibition Dedicated to Senga Nengudi to Open in Philadelphia May 2, the Only East Coast Venue

The Philadelphia Museum of Art will be the only East Coast venue for a major traveling exhibition devoted to Senga Nengudi, a leading figure of the 1970s Black American avant-garde and a pioneering artist of our time. Marked by her innovative use of everyday materials that range from water and sand to pantyhose and air conditioning units, Nengudi’s work bridges the mediums of sculpture and performance, offering a cross-disciplinary investigation into the personal experiences of the Black female body and the collective practices of community and ritual. Senga Nengudi: Topologies will trace the expansive range of the artist’s career and context from the 1970s to today through a combination of more than 70 artworks, including sculptures, environmental installations, and archival documentation. Shown together, they affirm Nengudi's pivotal role in redefining the possibilities of sculpture and abstraction, and exemplify the continuing vitality and urgency of her practice. The exhibition will be presented in the museum’s Dorrance Special Exhibition Galleries and is accompanied by a major catalogue.

Topologies will begin with an entire gallery dedicated to one of Nengudi’s earliest immersive installations. Titled Black and Red Ensemble, this work is on view for the first time since 1971 when it was presented as the artist’s master’s project for her M.A. in Sculpture at California State University. In the exhibition, visitors will be invited to walk through this red room while navigating a labyrinth of black plastic forms that hang from the ceiling. The presentation will continue with a gallery featuring Nengudi’s works from the early 1970s, created shortly after her return from a year studying abroad in Tokyo. Absorbing and reinventing aesthetic lessons from Japanese theatrical forms like Kabuki and Butoh, and inspired by the avant-garde artistic experiments of the Gutai Art Association and the “relational objects” of Brazilian artist Lygia Clark, these works signal Nengudi’s extraordinary early experimentation with material and form. This gallery will highlight the artist’s Water Compositions, which are heat-sealed vinyl sculptures filled with colored water, along with photographic documentation of Nengudi’s human-like fabric sculptures as they appeared installed throughout Spanish Harlem in New York City where she lived from 1971 to 1974.

An in-depth presentation of Nengudi’s iconic R.S.V.P. sculptures and their related documentation and ephemera will make up one of the most significant sections of the exhibition. Inspired by the experience of pregnancy and giving birth to her first son, these sand-filled pantyhose sculptures stretch, sag, and suspend in ways that speak to the resilience and fragility of the human form. In a statement from 1977, Nengudi wrote: “I am working with nylon mesh because it relates to the elasticity of the human body … from tender, tight beginnings to sagging ends… the body can only stand so much push and pull until it gives way, never to resume its original shape.”

As the R.S.V.P. series title suggests, these sculptures invite participation in both tactile and visceral ways. In some cases, this response is literal, as Nengudi encourages collaborators to engage with the sculptures in improvised movements. These activations will be represented in the exhibition by both photo and video documentation, including a series of photographs by Harmon Outlaw of artist Maren Hassinger (like Nengudi, Hassinger also trained as a dancer) engaging with one of the sculptures. In 1977, the series was featured in Nengudi’s first New York solo exhibition at Just Above Midtown—a now-legendary gallery run by Linda Goode Bryant from 1974 to 1986 that promoted artists of color. Nengudi continued to work on this series well into the 1980s, returning to it again in new and experimental ways in the 2000s. For example, in A.C.Q. I from 2016-17, the artist combines found pantyhose with discarded refrigerator parts, an air conditioning unit, and a fan that brings the nylons to life in similar ways to a performer—with breath and subtle motions.

Throughout the 1970s and 80s, Nengudi spent a significant amount of time working in the creative epicenters of New York and Los Angeles. While in Los Angeles she participated as a member of a loose collective known as Studio Z alongside a constellation of fellow artists and musicians that included Houston Conwill, Kathy Cyrus, Ron Davis, Greg Edwards, David Hammons, Maren Hassinger, Duval Lewis, Franklin Parker, Joe Ray, Roho, and Roderick Kwaku Young. Many of these Studio Z artists participated in Nengudi’s 1978 event titled Ceremony for Freeway Fets. Inspired by Japanese dance-theater and West African Yoruba festivals, this ceremony featured improvised dance, music, and pantyhose-adorned costumes all captured in photographs by Roderick Kwaku Young. Honoring this spirit of collaboration and the ways in which these artists and their creative outputs were deeply connected and intertwined, Topologies will also feature individual works by Nengudi’s contemporaries and long-time collaborators, among them David Hammons, Maren Hassinger, Ulysses Jenkins, and Barbara McCullough.

In addition to a section focused on Studio Z, the exhibition will also expand upon the role of Black-run spaces, including Gallery 32 in Los Angeles and Just Above Midtown in New York, as they provided platforms for radical experimentation for Black artists who, like Nengudi, were working in a conceptual nature during a period of extreme underrepresentation in, and exclusion from, the mainstream art world.

In Philadelphia, the exhibition will focus in greater depth on Nengudi’s work in recent decades. This includes the artist’s experiments with spray paint and dry cleaner’s plastic from the 1990s and her ephemeral sand installations that incorporate colored pigments and abandoned car parts. Also on view will be Nengudi’s first video installation, titled Warp Trance, which was produced when she was an artist-in-residence at the Fabric Workshop and Museum in Philadelphia in 2007. As part of her residency, Nengudi conducted research in textile mills across Pennsylvania and New York. Inspired by the sounds, rhythms, and patterns of the textile industry—itself deeply entwined in the histories of colonialism and exploitation—the resulting 3-channel video projection reflects Nengudi’s ongoing interest in dance and movement, specifically seen through the lens of the labor performed by both body and machine.

Chronicling the entire arc of Nengudi’s oeuvre, this is one of the most expansive exhibitions of the artist’s work to date and captures the range of her explorations in material and subject, in art and in life. As Nengudi has stated, “My art responds to being Black, being a woman, and being of a certain age. The artworks you’ll see on display represent someone who has had children, cared for her mother, and experienced many of the things life has to offer.”

Senga Nengudi: Topologies was previously presented at the Lenbachhaus Munich, the Museu de Arte de São Paulo, and most recently at the Denver Art Museum.

Timothy Rub, The George D. Widener Director and Chief Executive Officer of the Philadelphia Museum of Art, said: “We are delighted to bring this beautiful exhibition to Philadelphia as it culminates a wonderful itinerary that included Germany, Brazil, and Denver. It presents us with a rare opportunity to explore the artist’s extraordinary development in its full depth and breadth, and by placing her achievements into such a rich context we can see clearly just how salient her art continues to be for us today.”

Amanda Sroka, Assistant Curator of Contemporary Art and organizer of the Philadelphia Museum of Art exhibition, said: “Marking the grand finale of this international traveling exhibition, the presentation at the Philadelphia Museum of Art stands as a celebration of Senga Nengudi’s place in the history of art and a testimony to the enduring relevance of her work in the present. Generous in spirit and radical in form, Nengudi’s artworks offer an invitation for connection—with ourselves, with one another, and with the world.”

This exhibition is accompanied by an extensive exhibition catalogue by Matthias Mühling and Stephanie Weber and published by Hirmer Publishers (2020), in both German and English. It features commissioned essays by Kellie Jones, Catherine Wood, and Malik Gaines, as well as excerpts of historical and archival materials, an in-depth interview with the artist, and an extended timeline that situates Nengudi’s work and personal life as they relate to major socio-political events, as well as the commercial production of pantyhose. A portion of the 1978 Contextures catalogue is also re-printed in the catalogue to provide further context to her early work and connections to Conceptual Art. It will be available in the Museum Store ($45.00)

Topologies will be accompanied by a rich offering of virtual programs that expand on the themes of ritual, collaboration, and community that are at the heart of Nengudi’s life and work.

Support
The exhibition was organized by the Lenbachhaus Munich in cooperation with the Philadelphia Museum of Art.

In Philadelphia, the exhibition is curated by Amanda Sroka, Assistant Curator of Contemporary Art, with support from Alexis Assam, Constance E. Clayton Fellow.

Born in Chicago in 1943, Senga Nengudi spent much of the 1960s through the 1980s working between the cities of Pasadena, Los Angeles, and New York. In 1989, Nengudi moved to Colorado Springs where she continues to live and work today. While in Los Angeles, she pursued concurrent degrees in art and dance at California State University, where she graduated with an MA in Sculpture in 1971 following a formative year studying abroad at Waseda University in Tokyo. Throughout her studies, she also trained as a dancer and worked as an educator at the Watts Tower Arts Center and the Pasadena Art Museum (now, the Norton Simon Museum).

In the 1970s, Nengudi became a leading force within the emerging community of Black artists and musicians in Los Angeles and New York whose work engaged with the radical politics of the time through an abstract and dematerialized visual vocabulary. Since then, her media-spanning practice has drawn on a range of influences, including the cultures of free jazz and spoken word, Yoruba mythology, Japanese theater, Brazilian Constructivism, and African ritual. Characterized by experimentation with process, material, and form, Nengudi’s work challenges and reimagines the traditional narratives of Post-minimalism and Conceptual Art, while reframing the broader histories of both feminism and the Black Power Movement.

Major Exhibition Dedicated to Senga Nengudi to Open in Philadelphia May 2, the Only East Coast Venue