Robert Indiana's Monumental Sculpture, AMOR, to Grace the East Terrace of the Philadelphia Museum of Art 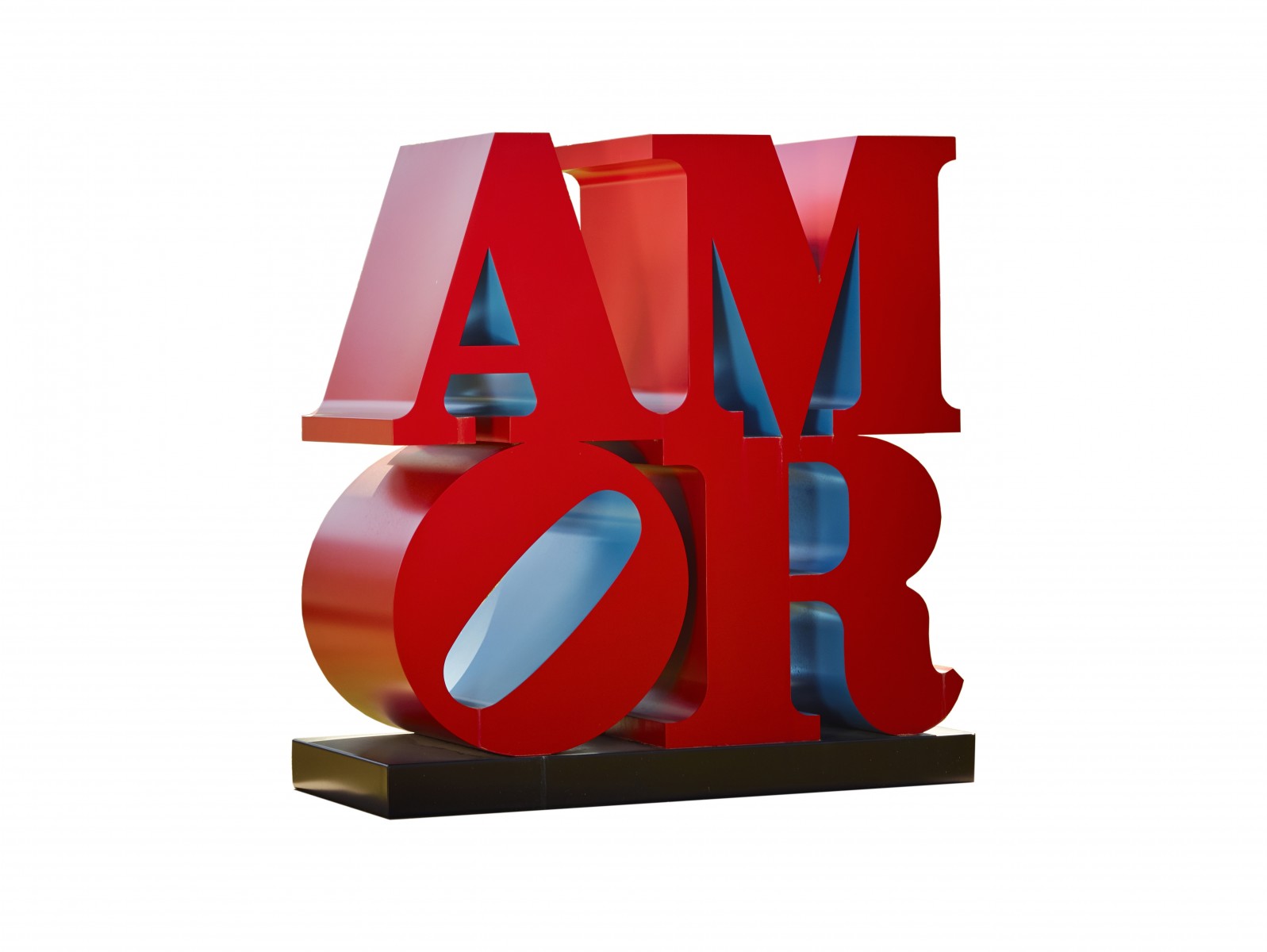 AMOR, Robert Indiana, 1998, Painted Aluminum, 6 feet × 6 feet × 36 inches, Base: 6 feet × 6 feet 2 inches × 38 inches, Collection of Morgan Art Foundation, Courtesy Simon and Marc Salama-Caro, Red Blue, Edition 2/5, ©Morgan Art Foundation/Artists Rights Society (ARS) New York
Important: By downloading this image, you are agreeing to the following permissions: Images are provided exclusively to the press, and only for purposes of publicity for the duration of an exhibition at the PMA. The Museum grants permission to use images only to the extent of its ownership rights relating to those images--the responsibility for any additional permissions remains solely with the party reproducing the images. In addition, the images must be accompanied by the credit line and any copyright information as it appears above, and the party reproducing the images must not distort or mutilate the images.

To honor His Holiness Pope Francis on the occasion of his visit to the United States, the Philadelphia Museum of Art and the Association for Public Art (aPA) are pleased to announce the installation of Robert Indiana’s monumental sculpture AMOR (1998) on the Museum’s East Terrace, where it will overlook the celebration of the Papal Mass on Sunday, September 27, which culminates the World Meeting of Families 2015. AMOR—meaning “love” in both Pope Francis’s native Spanish and the Church’s traditional Latin—will stand at one end of the Parkway facing, at the other end, Indiana’s renowned LOVE sculpture on John F. Kennedy Plaza.

The installation of AMOR outside of the Museum and overlooking the city of Philadelphia is also emblematic of an important civic and cultural collaboration between the Philadelphia Museum of Art, with its landmark building and internationally renowned art collection, and the Association for Public Art, which has placed sculpture throughout Philadelphia since 1872, notably along the Benjamin Franklin Parkway. The Parkway is known for its world-class cultural institutions and public art treasures.

AMOR will be unveiled on Tuesday, September 22, at 10:30 a.m., before the start of the World Meeting of Families Congress. The Congress is the largest international Catholic gathering of families, held every third year in a different city around the world. More than a million people are expected to gather on Benjamin Franklin Parkway for the concluding Festival of Families on September 26, to be attended by Pope Francis, and again on September 27 for the Papal Mass.

Robert Indiana originally conceived the celebrated LOVE image in 1965 through a series of paintings, and a year later in 1966, conceived his editions of LOVE sculptures. His masterpiece quickly gained widespread recognition and public acclaim, entering into major private and public collections around the world, including and most significantly the City of Philadelphia. Indiana’s LOVE has become one of the rare icons of modern art that resonate with large and diverse audiences.

Indiana created the Latin/Spanish version of the sculpture, AMOR, in 1998, in response to the changing demographics of the United States and his desire to speak to his fellow citizens. The colorful 6-foot-high aluminum sculpture is on loan from the Morgan Art Foundation, courtesy of Simon and Marc Salama-Caro, who are dedicated to preserving and promoting Robert Indiana’s artistic legacy.

“With the installation of this generous loan atop our famous steps, we hope to add the most appropriate artistic note possible to Pope Francis’s visit to Philadelphia,” stated Timothy Rub, The George D. Widener Director and Chief Executive Officer of the Philadelphia Museum of Art. “We are grateful to the artist, the Morgan Art Foundation and the Salama-Caro family for making this exceptional installation possible.”

”In the traditional language of the Church, amor vincit Omnia—love conquers all. The message underscores this historic moment for Philadelphia, and also speaks to the message of the Museum, a place that welcomes everyone. We encourage visitors to experience Indiana’s sculpture, and as they celebrate the Pope’s visit to Philadelphia, also step inside and explore the art in our collections, so many of which evoke spirituality, faith, and the age-old theme of love.”

Penny Bach, Executive Director of the Association for Public Art, said, “Since Robert Indiana’s LOVE was installed in Philadelphia in 1976, in what has since become known as Love Park, it has become the most recognized sculpture in a city known for having one of the largest collections of public art in the country. Now, with the installation of AMOR, these two iconic sculptures will be in dialogue with one another, anchoring the Benjamin Franklin Parkway in love.”

“As the theme of the Eighth World Meeting of Families is “Love Is Our Mission – The Family Fully Alive,” we are thrilled to celebrate family and the sanctuary of love and life with the installation of AMOR as we begin to welcome pilgrims from over 100 nations to the City of Brotherly Love and Sisterly Affection with open arms,” said Donna Crilley Farrell, Executive Director of the World Meeting of Families – Philadelphia 2015. “Pope Francis, a truly transformative global leader, will inspire Catholics and non-Catholics alike to reconnect to the importance of family as the cornerstone of society. With the AMOR sculpture, we will continue to be reminded that family and love formed the foundation of the upcoming events as we get ready to welcome the Holy Father.”

“Robert Indiana has said that LOVE is a one-sentence poem, which represents how he sees the world,” stated Simon Salama-Caro. “We are honored to be able to facilitate the loan of AMOR to the Philadelphia Museum of Art and the Association for Public Art as a reminder of the universal language of love.”

About Robert Indiana
Born in 1928, the American artist Robert Indiana is among the most universally recognized artists associated with the Pop Art movement. His work consists of bold, iconic images, and is represented in public and private collections around the world including the Philadelphia Museum of Art. The Whitney Museum of American Art organized a major retrospective of his work in 2013. The artist’s work will be among the highlights of International Pop, a major exhibition dedicated to the range and impact of the Pop movement globally, opening at the Philadelphia Museum of Art on February 24, 2016, and organized by the Walker Art Center.

About The Philadelphia Museum of Art
The Philadelphia Museum of Art is Philadelphia’s art museum. We are a landmark building. A world-renowned collection. A place that welcomes everyone. We bring the arts to life, inspiring visitors—through scholarly study and creative play—to discover the spirit of imagination that lies in everyone. We connect people with the arts in rich and varied ways, making the experience of the Museum surprising, lively, and always memorable. We are committed to inviting visitors to see the world—and themselves—anew through the beauty and expressive power of the arts.

About The Association for Public Art
The Association for Public Art (aPA, formerly Fairmount Park Art Association) commissions, preserves, promotes and interprets public art in Philadelphia. The aPA is the nation’s first private nonprofit organization dedicated to creating a “Museum Without Walls” that informs, engages, and inspires diverse audiences. We honor the past while supporting originality and innovation, and we advance opportunities for creative people to contribute to the city’s places and spaces. Established in 1872, the aPA integrates public art and urban design through exemplary programs and advocacy efforts that connect people with public art. We respond to the conditions of our time, adding new perspectives to the civic landscape and maintaining a legacy for future generations, while promoting Philadelphia as a premier city for public art. For more information, visit associationforpublicart.org .

More information about Robert Indiana can be found at robertindiana.org.

Robert Indiana's Monumental Sculpture, AMOR, to Grace the East Terrace of the Philadelphia Museum of Art