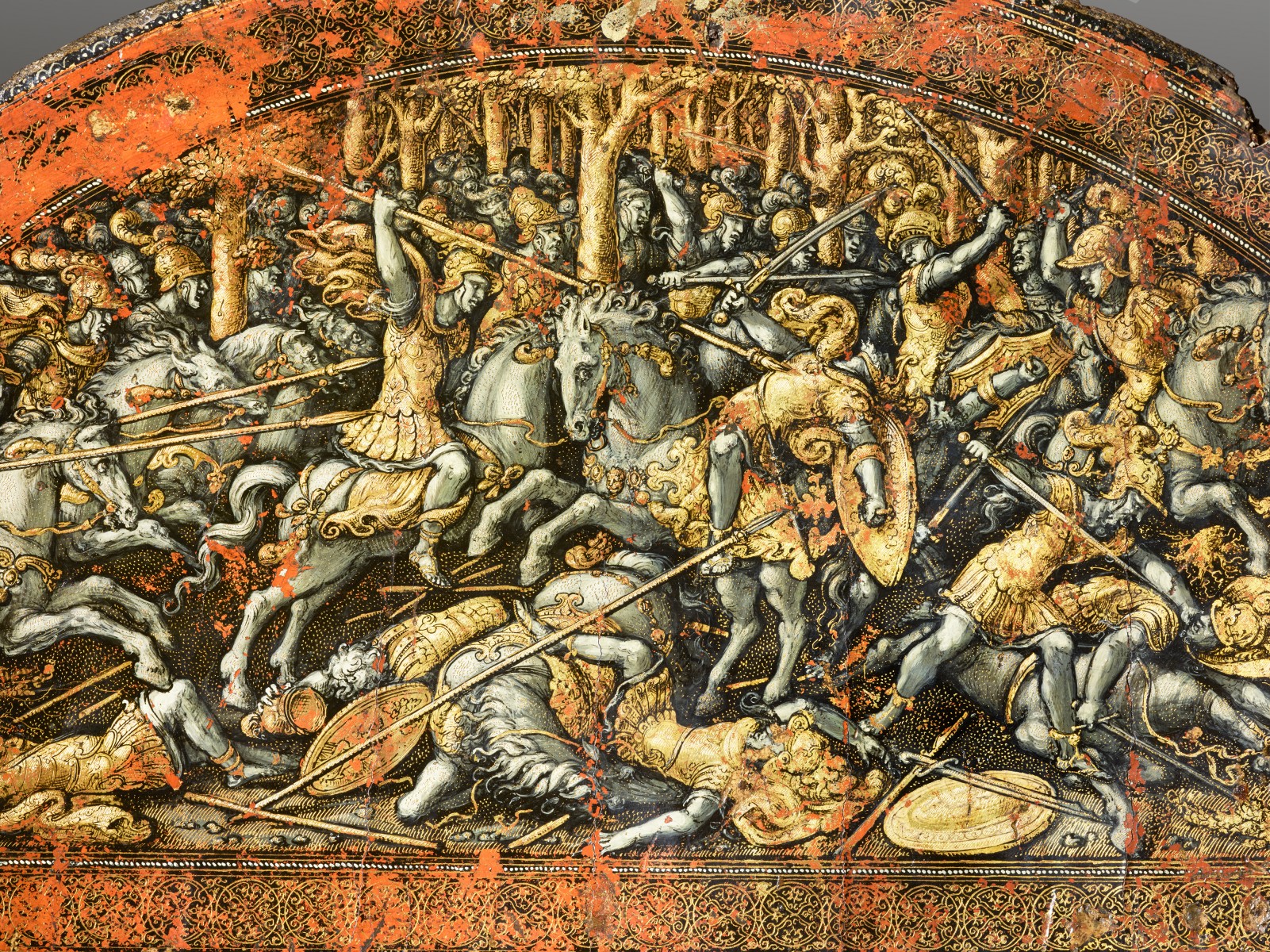 Philadelphia, PA (September 13, 2021)—The Philadelphia Museum of Art and the Czech Republic’s National Heritage Institute jointly announced today an agreement whereby an important Italian pageant shield with decoration attributed to Girolamo di Tommaso da Treviso (Italian, 1497-1544) has now been confirmed as belonging to the Czech Republic and will be returned to the Czech Republic from Philadelphia, where it has been on display in the Museum’s Galleries of Arms and Armor since 1976 as part of the Carl Otto Kretzschmar von Kienbusch Collection. Timothy Rub, the George D. Widener Director and CEO of the Philadelphia Museum of Art and Naděžda Goryczková, the General Director of the National Heritage Institute, jointly announced the agreement in Philadelphia this morning, a step that reflects the spirit of cooperation that has guided all of the discussions between the museum and the Czech Republic about this work of art and has resulted in this mutually satisfactory resolution.

The shield was formerly in the collection of Archduke Franz Ferdinand, the heir to the Austro-Hungarian Empire, whose assassination in 1914 touched off World War I. The Archduke owned one of Europe’s preeminent collections of arms and armor, which was displayed at his country residence, Konopiště Castle, near Prague. When the former Habsburg imperial properties were redistributed after the war, the castle and its collections became the property of the government of the newly formed Czechoslovakia in 1919. In 1939 the Nazi government annexed the part of Czechoslovakia where Konopiště was located, and in 1943 the German army (Wehrmacht) confiscated the Konopiště Castle armor collection, including the shield, and took it to Prague to be housed in a new military museum. However, Adolf Hitler’s arms and armor curator, Leopold Ruprecht, soon skimmed off the cream of the collection, inventoried it, and dispatched it to Vienna, intending the best for Hitler’s planned mega-museum in Linz, Austria. At the end of the war, large groups of Konopiště objects were recovered by the Allies and returned to Czech authorities in 1946, but among 15 objects that remained missing was a shield whose description was similar to the pageant shield. Based on previously available documentation, the museum had been unable conclusively to identify the shield in its collection as one of the unrecovered objects from the Konopiště Castle armor collection.

Since 2016, the museum has been collaborating with historians in the Czech Republic to evaluate the history and provenance of the Italian pageant shield. Recent research identified pre-WWII inventories which, in tandem with a photograph, dated to around 1913, showing the museum’s shield as displayed at Konopiště Castle provided by the museum, persuasively identify the shield as the one illegally taken from Konopiště Castle by the Nazis and never restituted. Based on these revelations, the Board of Trustees of the Philadelphia Museum of Art unanimously concluded that rightful title in the work belonged to the Czech Republic and approved the return of the armor at its meeting of June 17, 2021.

“Together with our friends from the National Heritage Institute, the Ministry of Culture and the Foreign Ministry of the Czech Republic, we are pleased to announce the resolution of this investigation. A work that had been lost during the turmoil of World War II is being happily restituted, and out of this has come an exceptional scholarly partnership,” said Timothy Rub, the George D. Widener Director and CEO of the Philadelphia Museum of Art.

“The Philadelphia Museum of Art deserves enormous credit for being so forthcoming in returning this immensely valuable piece of art to the Czech Republic. This case is a prime example of best practices in restitution. Our fruitful collaboration can serve as a model of international partnership in restoring looted art,” stated Hynek Kmoníček, Ambassador of the Czech Republic to the United States.

“After many decades, a remarkable piece of Italian Renaissance art, historically belonging to the d´Este Collection of the Konopiste Castle, returns to the Czech Republic. We are delighted that after important negotiations we will soon be able to reinstate it as part of the collections of the National Heritage Institute and make it available once again to the public in Europe.

“The Renaissance shield, in its misfortune of being removed from its historic collection, also experienced great fortune. It has in recent years been protected, curated and preserved by the Philadelphia Museum of Art, an institution with an exceptional team of art connoisseurs, specialists, restorers, and conservators. These professionals have made exemplary efforts to care for, restore, and preserve this outstanding object, and as a result of their excellent work we will soon be able to present it to the public.

“After eight decades the shield will finally return home, to the place where it has been decorating the Konopiště Castle for many years. Justice prevailed over the despotism of the Nazi regime, which illegally alienated this precious artefact that dates back to the beginning of the 16th century. My special thanks go to Mr. Timothy Rub and the Board of Trustees of the Philadelphia Museum of Art and to Czech institutions: the National Heritage Institute, the Ministry of Foreign Affairs of the Czech Republic and the Embassy of the Czech Republic in Washington, D. C. for their extraordinary work and their great engagement,“ said Lubomír Zaorálek, Minister of Culture of the Czech Republic.

As part of the agreement, the Czech Republic has graciously agreed to consider any future loan request for the shield from the museum.

About the Pageant Shield

The elaborate painted decoration of the shield is attributed to Girolamo di Tommaso da Treviso (c. 1497-1544), based on a design by the painter Giulio Romano (Italian, 1492/99-1546). The shield was made about 1535 of wood, linen, gesso, gold, and pigment and is 24 inches in diameter. The scene depicted on its exterior shows the storming of New Carthage (209 BCE) in present-day Spain—an important episode of the Second Punic War (218 to 201 BCE) and a great victory of the Roman general Publius Cornelius Scipio (237–183 BCE). Originally intended purely for ceremonial purposes, the decoration suggests a historical parallel between Scipio’s military achievements, many of which occurred in Africa, and the victories of Holy Roman Emperor Charles V (ruled 1519 to 1556), who was returning in 1535 from a successful military campaign against Muslim pirates in northern Africa. The shield was probably commissioned for one of the ceremonies that were being held throughout Italy to welcome Emperor Charles V in triumph.