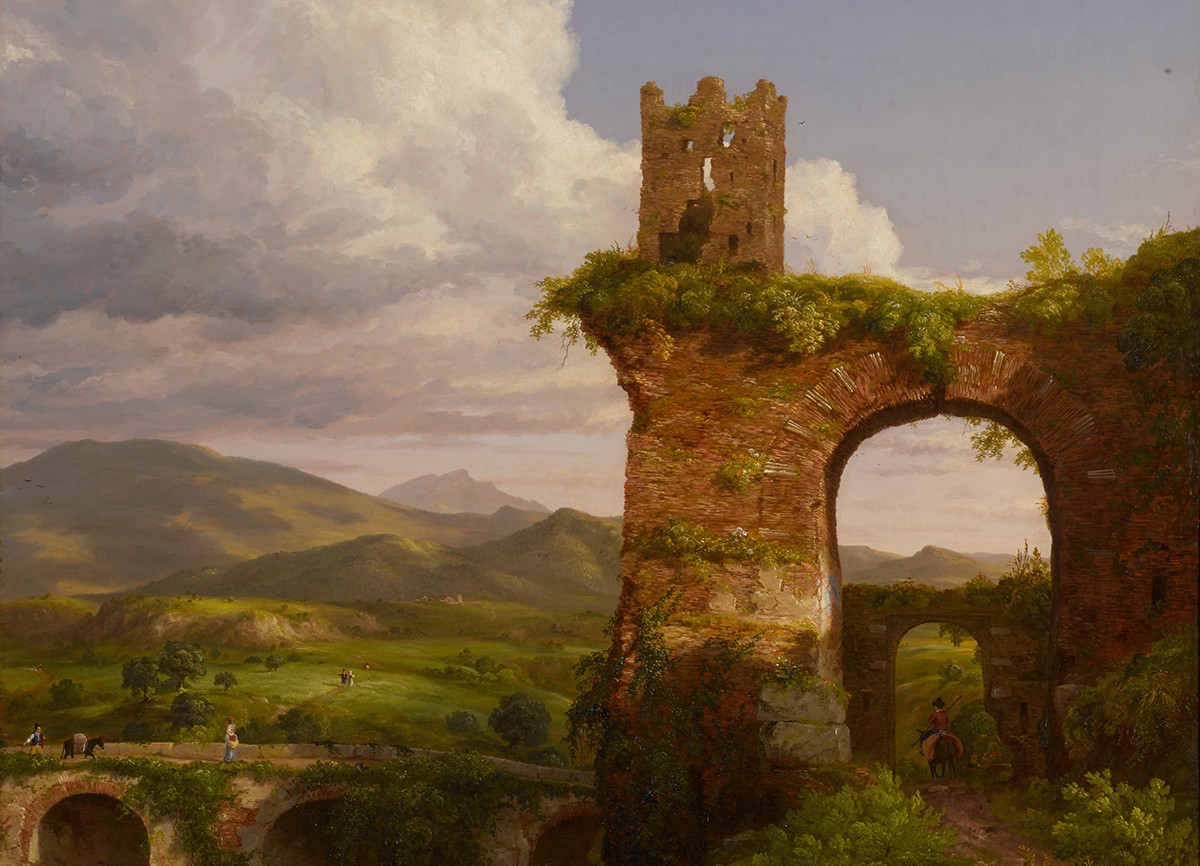 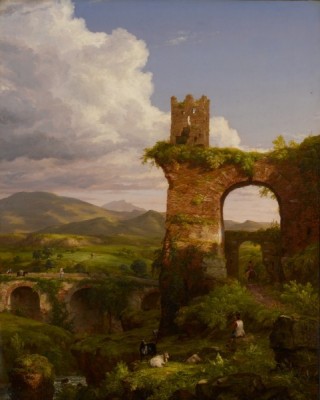 Philadelphia, PA (June 8, 2021)— The Philadelphia Museum of art announced today that it will display in its American galleries The Arch of Nero, a masterpiece by the great 19th-century American landscape painter Thomas Cole (1801–1848), as a long-term loan from the Thomas H. and Diane DeMell Jacobsen PhD Foundation. Purchased by the Foundation at Sotheby’s American art auction in New York on May 19, 2021, this painting was one of a number of works of art sold by the Newark Museum of Art in Newark, New Jersey, to raise funds for the direct care of its collection. The Arch of Nero was widely considered to be the most important of the works sold by the museum. The Jacobsen Foundation, an organization dedicated to sharing its collection of American art with museums across the country, purchased The Arch of Nero intending to keep this important painting in the public domain. It will be placed on view in Gallery 208 of the Philadelphia Museum of Art beginning July 2, 2021.

Cole painted The Arch of Nero at the height of his powers in 1846, drawing upon his memory and sketches made in Italy in 1832. A boldly composed image with Cole’s typically expressive handling, the subject focuses on a monumental arch, ravaged by the passage of time and seen against green hills and a bright blue sky with gathering clouds. Known as the “Arch of Nero” in Cole’s day, the subject of this painting was actually part of an ancient Roman aqueduct near Tivoli. To Cole, this ruin served as a meditation on the transitory glory of empires and the cycle of rise and fall of civilizations repeated throughout world history. The aura of emperor Nero’s violent and decadent rule (54–68 CE) hangs over this painting, representing in Cole’s vision an era when the Roman republic had devolved into a corrupt and tyrannical empire. Painted in the year that the United States invaded Mexico in a thinly veiled land grab, The Arch of Nero calls to mind the similarly greedy expansion of the Roman empire and its ultimate ruin. As the Cole scholar William L. Coleman has noted, the artist’s lesson on the fate of tyrants, his concern over the erosion of republican values in this country, and his critique of the nation’s expansion of colonial (and slaveholding) territories—implicit in his choice of the subject of this painting and its red, white, and blue-clad figures—remains pertinent today.

Revered in his lifetime, Cole was recognized as the leader of a group of New York-based landscape artists known as the Hudson River School. His legacy can be seen in the galleries of the Philadelphia Museum of Art in the work of artists who were inspired by his example, such as Asher B. Durand, Frederic E. Church, Albert Bierstadt, Sanford Gifford, Martin Johnson Heade, and George Inness. The museum owns two early paintings by Cole, but no painting that represents his finest and most mature work. “We are thrilled to have this great painting in our galleries,” said Kathleen A. Foster, the museum’s Robert L. McNeil Jr. Senior Curator of American Art, “and we are grateful to the Jacobsen Foundation for ensuring that it will continue to be seen by the public for years to come.”

At the Philadelphia Museum of Art, The Arch of Nero will be presented in context with works by Cole’s Hudson River School peers and other important examples of mid-late 19th-century American landscapes that capture the romanticism of the age.

About The Thomas H. and Diane DeMell Jacobsen PhD Foundation

The mission of the Jacobsen Foundation is “to carefully research and obtain American masterpieces, provide restoration, if necessary, and facilitate long-term loans to accredited major museums and traveling exhibitions.” This unique program allows curators to affordably complement works in their museum galleries and to build enriched education programs. The Foundation Collection, coupled with the founder’s personal collection, is composed of 400 works of art, featuring paintings, sculptures, works on paper, silver, glass, ceramics, and furniture. Since its inception in 2011, the Foundation has offered loans to over 30 major museums, as well as a traveling exhibition drawn from the collection, “The Art of Seating,” that appeared in twenty-eight venues throughout North America.

Another major oil painting recently acquired by the Jacobsen Foundation, Mary Cassatt’s Baby Charles Looking over his Mother’s Shoulder (No. 3) of 1900, was sold by the Brooklyn Museum. Like the Cole, it will continue to be enjoyed by the public, as it will be placed on loan this summer to The Mint Museum in Charlotte, North Carolina.

About the Philadelphia Museum of Art

For additional information, contact the Communications Department of the Philadelphia Museum of Art at pressroom@philamuseum.org. The Museum is located on the Benjamin Franklin Parkway at 26th Street. For general information, call 215-763-8100.