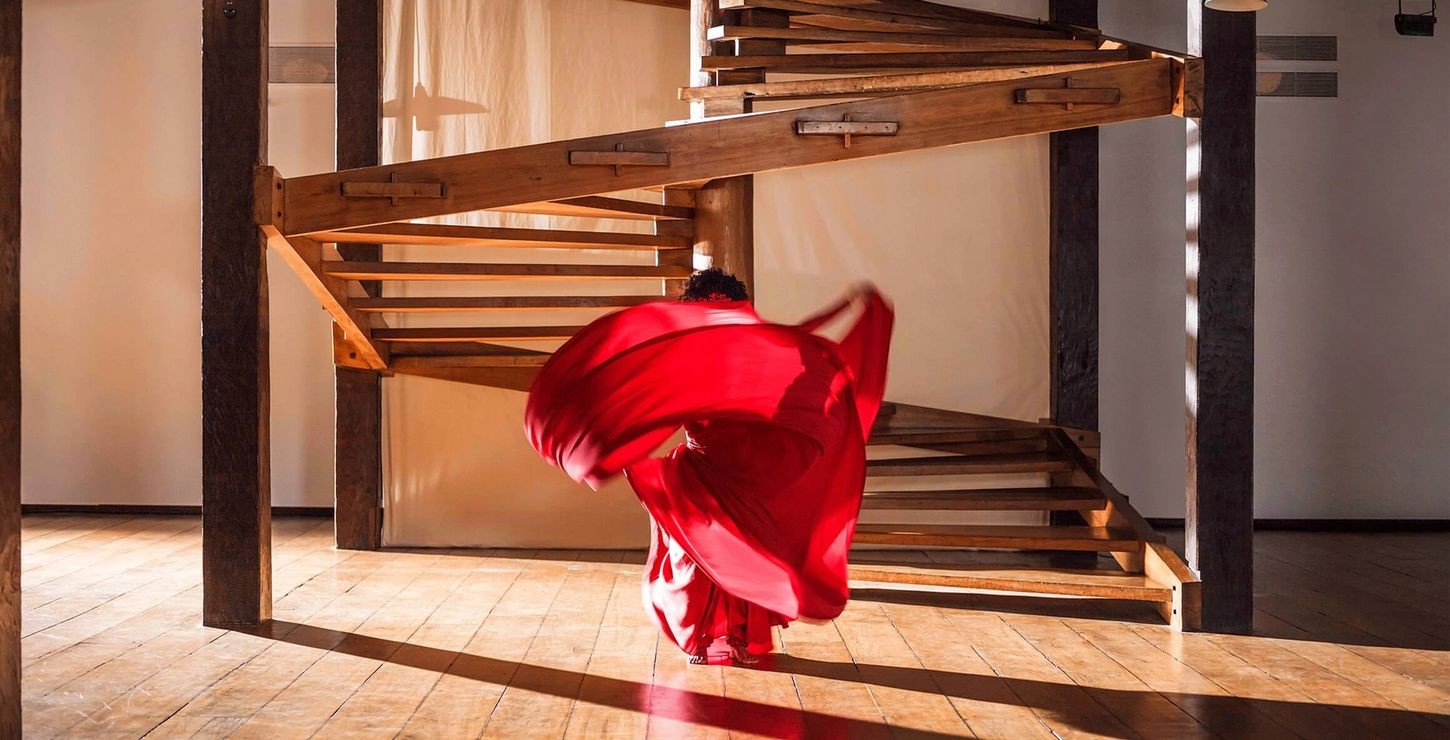 Nine-Screen Video Installation Focuses on the Complexities of Diasporic Afro-Brazilian Histories Through the Legacy of Architect Lina Bo Bardi - January 28-May 29, 2023

The Philadelphia Museum of Art will present an expansive video installation by the British artist Sir Isaac Julien, one of the world’s leading figures in the use of film and video today. Isaac Julien: Lina Bo Bardi — A Marvellous Entanglement, produced in 2019, pays poetic homage to the architectural visions—at once modernist, community-focused and radically inclusive—of Lina Bo Bardi, one of the leading artists of postwar Brazilian Modernism, whose influence after her death in 1992 has grown far beyond Brazil where the Italian-born Bo Bardi had established herself in the 1940s. Julien presents the viewer with a complex layering of sounds and images, including footage of Bo Bardi’s buildings in São Paulo and other cities, staged performances of music, voice, and movement; and readings by acclaimed Brazilian actresses Fernanda Montenegro and Fernanda Torres who portray the architect at different moments of her life. As they narrate, footage of Bo Bardi’s São Paulo Museum of Art, SESC Pompéia, Salvador’s Teatro Gregório de Matos and the Teatro Oficina (whose co-founder, Zé Celso, makes an appearance) reveals the architectural innovations of each site. Through his examination of Bo Bardi’s architecture and ideas, Julien maps the complex entanglements of diaspora and migration, Afro-Brazilian histories, and Brazil’s involvement in the transatlantic slave trade. As Julien channels Bo Bardi, A Marvellous Entanglement proposes that history is non-linear and open-ended, and suggests that while museums and cultural institutions may “contain” histories, they can also be responsive and active participants in contemporary dialogues.

Sasha Suda, the museum’s George D. Widener Director and CEO, said: “Isaac Julien’s A Marvelllous Entanglement celebrates the architect Lina Bo Bardi, who never hesitated to interrogate the difficult and resilient histories of Brazil. This multi-channel video piece uses the unique language of moving images to highlight Bo Bardi’s interdisciplinary artistic practice. We are honored to bring this work to life at the heart of the PMA, in the Williams Forum, and look forward to bearing witness to our visitors’ encounter with it.”

A Marvellous Entanglement is based on six years of research and filming on location in Brazil. It is set to a score by the German-Spanish composer Maria de Alvear and unfolds over 40 minutes. Exploring Bo Bardi’s engagement with the social and cultural dimensions of art, architecture, and design, A Marvellous Entanglement establishes Bo Bardi's iconic staircase, which she designed for the Museum of Modern Art, Bahia (MAM-BA) in Salvador, as the stage upon which Julien orchestrates an original work by choreographer Zebrinha, performed by the Balé Folclórico da Bahia dance company. The Restaurante Coati, a Lina Bo Bardi modern ruin perched on the Ladeira da Misericórdia (Mercy Slope) in Salvador, where enslaved Africans were once gathered to labor in plantations and mines, accommodates in turn a series of performances by Brazilian art collective Plataforma Àràká.

Textures and details of her architecture elsewhere also appear: the accordion folds of concrete walls that she designed as a low-cost way of increasing structural integrity at Coati, and her use of the color red to signify its importance in Afro-Brazilian religious traditions of Candomblé, in both the drum factory building she transformed into SESC Pompéia and at the São Paulo Museum of Art. Other sequences collapse the historical and the contemporary: a black-and-white sequence shot at Bo Bardi’s Casa do Benin community center reveals swaying textiles by the artist Goya Lopes, installed as an homage to the late Marielle Franco, a Black politician and activist whose assassination sparked widespread protest in 2018. Julien’s collaborations in the making of this work perform reparative work, celebrating Bo Bardi’s underrepresented legacy of acknowledging and responding to Afro-Brazilian histories of diaspora and the transatlantic slave trade.

It was in 1996 that Isaac Julien first encountered the architecture of Bo Bardi, who had designed some of Brazil’s most prominent art and cultural institutions and who emphasized improvisation, recycling existing spaces and materials, the importance of local environmental contexts, and care for social relations. Julien returned to Brazil in 2012 to present his work at SESC Pompéia, which today is a major São Paulo landmark. The experience provided what he called a “light bulb moment in relation to thinking about space and architecture and the distribution of images in space.” The title of Lina Bo Bardi — A Marvellous Entanglement thus echoes a quote from the architect: “Linear time is a western invention; time is not linear, it is a marvellous [sic] entanglement, where at any moment points can be chosen and solutions invented without beginning or end.”

At the Philadelphia Museum of Art, Erica Battle, Interim Head of the Department of Contemporary Art and John Alchin and Hal Marryatt Curator of Contemporary Art, will oversee the installation of A Marvellous Entanglement with the assistance of Swagato Chakravorty, the Daniel W. Dietrich II Fellow in Contemporary Art. They worked closely with the artist and his team to reimagine the presentation of the work as a vertical array of stacked screens for the proscenium space of the Williams Forum, which features Frank Gehry’s 40-foot sculptural staircase. A key sequence filmed around an iconic Bo Bardi staircase at MAM-BA will engage poetically with Gehry’s design, bringing to fruition a tête-à-tête between architects and opening possibilities for the intersection of art and architecture.

Battle commented, “Isaac Julien’s installations are choreographic and kaleidoscopic experiences that give moving images an immersive, sculptural dimension. Both narrative and nonlinear, Julien’s works do not simply document their subjects but transport viewers into other worlds and new ways of seeing. The siting of Lina Bo Bardi — A Marvellous Entanglement at the center of the museum’s main building invites anyone who enters the museum on this revelatory journey.”

About Isaac Julien
Sir Isaac Julien, CBE RA, (born 1960, London) explores the complexities of race, gender, and sexuality in the contexts of diasporic culture. Julien’s feature films, documentaries, and multi-screen installations constitute a poetics of the moving image that takes up questions of representation, history and memory, and economic forces of labor and capital that result in the displacement of people.

A child of immigrants from the Caribbean island of St. Lucia, Isaac Julien studied at St. Martin’s School of Art. In the early 1980s, he played a crucial part in the emerging Black British arts movement that drew upon anti-racist, feminist, and anti-imperialist politics. Julien co-founded the Sankofa Film and Video Collective in 1983. His work has explored race, gender, and sexuality with particular interest in global Black histories. His 1989 film exploring author Langston Hughes and the Harlem Renaissance, Looking for Langston, garnered major acclaim. His 1991 debut feature Young Soul Rebels won the Semaine de la Critique prize at the Cannes Film Festival. Julien has participated in the Venice Biennale; the Gwangju Biennial, South Korea; Prospect 1, New Orleans; Performa 07, New York; and documenta 11, Kassel. He has taught extensively, serving as Chair of Global Art at University of the Arts London (2014–2016) and Professor of Media Art at Staatliche Hochschule für Gestaltung, Karlsruhe, Germany (2008–2016). He is currently Distinguished Professor of the Arts at the University of California, Santa Cruz. He is the recipient of the James Robert Brudner ’83 Memorial Prize and Lectures at Yale University (2016). Julien was awarded the title Commander of the Most Excellent Order of the British Empire (CBE) in the Queen’s birthday honors, 2017, and received the Charles Wollaston Award for most distinguished work at the Royal Academy Summer Exhibition and was a Turner Prize nominee. In 2018 he was named a Royal Academician. In 2022, he was awarded the prestigious Goslarer Kaiserring Award and was knighted by Queen Elizabeth II for his contributions to the arts. His work is included in major collections, including the Tate, London; the Museum of Modern Art, N.Y.; the Centre Pompidou, Paris; the Solomon R. Guggenheim Museum, N.Y.; and the Hirshhorn Museum and Sculpture Garden, Washington, D.C.

About Lina Bo Bardi
Lina Bo Bardi, (born Achillina Bo in Rome, Italy) was a polymathic designer, scenographer, artist, essayist, and a central figure of Latin American modernist architecture. Emigrating to São Paulo, in 1946, she developed a practice that melded elements of European architectural modernism with Brazilian history and cultural heritage, alongside an activist commitment to populism and resisting Eurocentrism. She emphasized sustainability and adaptive reuse through her interdisciplinary practice, creatively responding to local, sociopolitical, and environmental contexts across her projects. Her buildings are among Brazil’s most prominent art and cultural institutions, including the São Paulo Museum of Art (MASP), Museu de Arte Moderna da Bahia (MAM-BA), the Teatro Oficina, and SESC Pompéia.

This presentation was organized in conjunction with the Barnes Foundation, ICA Philadelphia, the Fabric Workshop and Museum, on the occasion of the Barnes Foundation’s centennial and its commissioned film installation, Once Again… (Statues Never Die), which was seen in 2022.

We are Philadelphia’s art museum. A world-renowned collection. A landmark building. A place that welcomes everyone. We bring the arts to life, inspiring visitors—through scholarly study and creative play—to discover the spirit of imagination that lies in everyone. We connect people with the arts in rich and varied ways, making the experience of the museum surprising, lively, and always memorable. We are committed to inviting visitors to see the world—and themselves—anew through the beauty and expressive power of the arts.