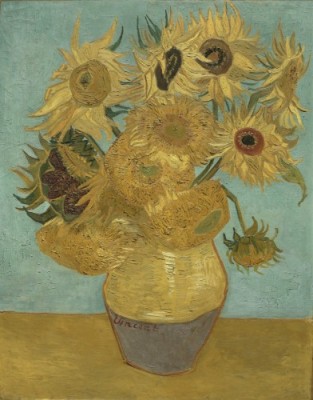 In 1888-89 in the southern French city of Arles, Vincent van Gogh painted a number of versions of what was to become one of the most famous images in the history of art, his Sunflowers.

Today these paintings are located in museums across the globe, but they have never been seen together—until now. On August 14, 2017, for the first time, five versions of Van Gogh’s Sunflowers will be presented in a way the artist could never have imagined.

Starting at 12:50 p.m. EST, there will be a consecutive relay of five, 15-minute Facebook LIVE broadcasts, beginning with London. Each will take place in front of a different Sunflowers painting. All will celebrate and explore Vincent van Gogh’s life and work. This is the first time ever that a live Facebook ‘relay’ of this type will take place among different cultural institutions worldwide.

To further unite the paintings, in a way that is impossible in the physical space of a gallery, the five museums worked together with Facebook to create a fully immersive digital exhibition, entitled Sunflowers 360.

Using a combination of VR technology and CGI to create an experience that will look and feel as if the five paintings were actually together in one room, viewers can interact with Sunflowers 360 on Gear VR or view as a 360-degree video on Facebook. Entering the gallery in VR, visitors to this exhibition will be able experience a three-dimensional environment in which to view each of the paintings, or go on a guided tour of each painting.

Willem van Gogh—the great-grandson of Van Gogh’s brother Theo—will narrate the experience, sharing personal memories of these paintings. Sunflowers 360 was been released today (August 10, 2017) on the Facebook pages of each museum and through the Oculus store.

The inspiration for this collaboration came from the United Kingdom, where the National Gallery’s highly successful Sunflowers display in 2014 reunited the London and Amsterdam versions of the painting for the first time in 65 years.

Willem van Gogh notes: “Rather like the Mona Lisa and The Night Watch, Van Gogh’s Sunflowers are works of art that continue to intrigue and inspire, perhaps into eternity. Indeed, each generation forges a fresh, highly personal bond with them. The virtual gallery and live stream now provide a novel way for art lovers, young and old, to admire these magnificent masterpieces, from all corners of the globe.”

At the Philadelphia Museum of Art, the tour of Gallery 161, where Sunflowers hangs, will be hosted by Jennifer Thompson, The Gloria and Jack Drosdick Curator of European Painting and Sculpture and Curator of the John G. Johnson Collection. She says: “Van Gogh’s Sunflowers in Philadelphia is the only version to be found in the United States, and is one of the most admired works in the Museum’s collection. Together with the rest of celebrated series, it tells a story both of greatness and poignancy. We are delighted to participate in #SunflowersLive. It will offer an unprecedented experience of the artist’s achievement in this series, and will hopefully inspire many to see each of the Sunflowers up close, in person, here in Philadelphia and at our sister institutions abroad.”

About the Van Gogh Sunflowers Series

The Sunflowers series dates from 1888, when Van Gogh left Paris to paint in the brilliant sunshine of the South of France. He rented a house in Arles—‘The Yellow House’—and invited Paul Gauguin to come and join him so the two artists could paint together. Waiting for Gauguin to arrive, Van Gogh painted a series of pictures of sunflowers to decorate his friend’s bedroom. They were meant as a sign of friendship and welcome, but also of Van Gogh's allegiance to Gauguin as his artistic leader.

Vincent wrote to his brother Theo in August 1888: ‘I am hard at it, painting with the enthusiasm of a Marseillais eating bouillabaisse, which won't surprise you when you know that what I’m at is the painting of some sunflowers. If I carry out this idea there will be a dozen panels. So the whole thing will be a symphony in blue and yellow. I am working at it every morning from sunrise on, for the flowers fade so quickly. I am now on the fourth picture of sunflowers. This fourth one is a bunch of 14 flowers...it gives a singular effect.’

Van Gogh had been deeply influenced by Japanese art: its simplicity of design and bright, flat colors with bold contour lines were things that he sought to incorporate into his own work. Color itself came to have special symbolic meanings. Yellow, in particular, referred to warmth and friendship. The dying flowers are built up with thick brushstrokes (impasto), which evokes the texture of the seed-heads. The individual petals are often painted with single, soft, yellow brushstrokes.

Van Gogh and Gauguin worked together throughout autumn 1888, but it ended very badly towards the end of that year when Vincent seemed to have a nervous breakdown, famously cut off part of his ear and entered an asylum.

Early the next year, following this nervous collapse, he returned to the subject of sunflowers once again.

The Philadelphia Museum of Art’s picture is closest in composition and character to the versions in Munich and London.